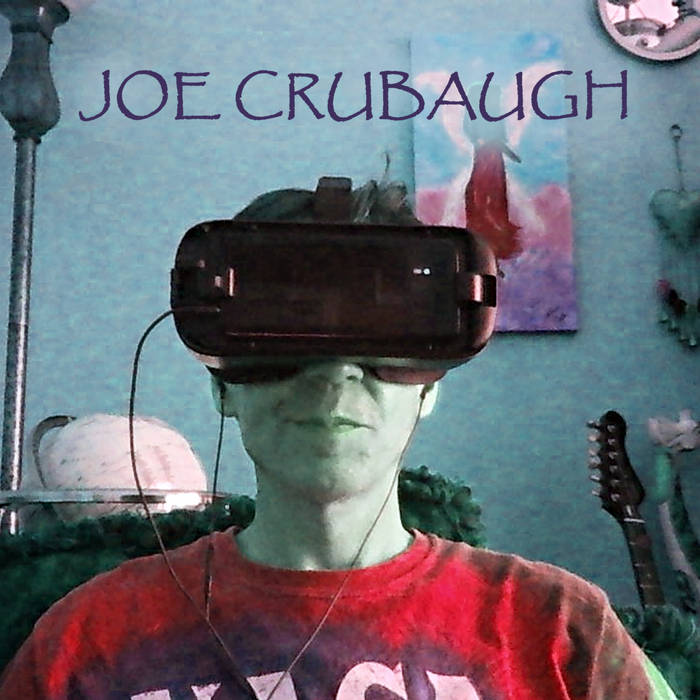 The long-awaited debut album from Joe Crubaugh is finally here! Featuring 11 original songs, the album clocks in with over 40 minutes of tunes. The new album was meticulously recorded in Crubaugh's sprawling studio he has described as "an old laptop, several rooms, and a few quiet closets around the house."

For those who've been living beneath a rock in a dank cave, Joe Crubaugh (known simply as "Joe" to his legion of fans) was born in Tupelo, MS, but his songs might evoke Elvis Costello with a dash of Tom Petty before that other singer from Tupelo comes to mind.

Written, performed, recorded, and produced by Joe Crubaugh, with the exception of additional vocals from Jodi Crubaugh on "Don't Let Me Go."

Track Name: Best at Being Me
Some days it's kind of tough
Living in this dream
Finding where you fit and climbing
All the walls between
And people love to tear you down
They'll stomp you like a trampoline
And there's always someone better at
Almost anything

I listen to you groan
Hear your drama night and day
You ask for my advice but don't remember
A word I have to say
Last night I dreamed about the crossroads
I said Devil, just make it go away

Let me clean your dishes
Let me rub your back and feet
I'll mow your yard, wash your car
You just pick a day this week
But you better send that frown out of town
Or I'm gonna leave for Tennessee

Somewhere in the back of my mind
I've seen your face a thousand times
Maybe you're the dream I can't let go
When the fates are so unkind
It's easy to be disinclined but
Take a chance and love me like you know
Baby don't let me go
Baby don't let me go
Don't let me go
Track Name: Dog Sniffin' Blues
I hear the dog a sniffin'
Sniffin' at the door
My wife already fed him
But he still wants some more
He's got an angry stomach
I think that's plain to see
But I know after I feed him
He'll just go out and pee

When he was just a puppy
He peed upon the floor
He still pees on the carpet
And tinkles on the door
He hacks up phlegm and spittle
I know his time draws near
But that dog, he keeps on pissing
Lord, I want him out of here

There's probably rich folks petting on
Their thousand-dollar dogs
They probably teach their canines
Not to roll around in their own logs
My mutt, he keeps on rolling, rolling
Smells like a sewer breeze
If dogs find relief in heaven
His piss will surely rain down on me.
Track Name: Wishing My Life Away
Three more weeks till holiday
Three more weeks of getting paid
See my friends, not much to say
It's looking like more snow today
So I grab my phone and I read the news
So many people got nothing to lose
But they say the future's gonna be okay
And I find myself wishing my life away

Sitting at the traffic light
Thinking 'bout a dream last night
You and I were slipping away
Like Audrey in Roman Holiday
And I wish that I could go back to bed
And stay in the heaven that was in my head
Light turns green, it's another day
And I find myself wishing my life away

I still have a picture of you and me
Last June sitting on the beach
Wish that I could go back in time
Live in the heaven that's in my mind
But I know the world don't work that way
I really don't have more to say
Just want you to know that I'm okay
While I'm sitting here wishing my life away
Wishing my life away
Track Name: Gitmo
I've been running from the CIA
I'm a high-level member of the worldwide evil, well
That's what they say
I've been flown around the planet on a secret plane
Had my tool put on display
Can't go home, they won't lend me a phone
I got tortured in the USA
And I'm not crazy 'bout Jihad
Just because I tried to make it
With a cute girl from Islamabad

Everything is one big lie
The Pentagon said I had knives and bombs and flew anthrax on a kite
Told my mom I was a terrorist, wouldn't let me say goodbye
They claim my Eagle Scout award no longer will apply
And I don't back the Taliban
I don't bleed pinko commie red, and I've never been to Iran

I'm headed for Gitmo
I'll be there for my whole life life
(Rockin' in Gitmo)
Gonna get beat up tonight
(Fun times in Gitmo)
You can't phone and you can't write
(Lockdown in Gitmo)
I'm never gonna see the light
Track Name: Too Late
I'll tell you something, please don't think I'm crazy
Don't try to help cos you won't change my mind
But when I saw her yesterday
She almost knocked my heartbeat out of line
She smiles like August in December
Likes to wear a jacket that she bought in Tokyo
Can't tell her that I think she's fine
But just the same, I want to let her know
I really want to let her know

What the hell happened to this place?
Everywhere I turn it's Pharisees up in my face
Rich still eat the poor everyday
Gonna find another way

All I need is understanding
And a love to call my own
You can run or you can try to make
The place where you belong
Either get it right or wrong
Face another day
Gonna find another way
Track Name: Peace with the World
I heard you got a brand new job
I saw you driving in your brand new car
And I suppose new friends too
Just want you to know I feel happy for you

I heard you found a new romance
He's everything you want him to be
Well, I'm not placing any bets
I guess I'm glad that it won't be me

Cos when you ditched me I could tell
You were one messed up little girl
Glad to see you recovered well
And you finally made peace with the world
Track Name: Mississippi Moon
Tonight I'm going far away
To China or Birmingham
The road is calling and stars are falling
On the lakeside next to town

Foxfire's burning in the swamp
The lightning bugs, they glide
While I'm sleeping raincrow's weeping
Stars are in my eyes

Bandcamp Daily  your guide to the world of Bandcamp

Tasty gems from around the world, plus interviews with Kaitlyn Aurelia Smith and Nick Hakim.